Wind power: how does it work?

1 - The operation of onshore wind turbines

The blades of the wind turbine capture the force of the wind and turn an axis (the rotor) at 10 to 25 revolutions per minute. A system allows the nacelle to be oriented so that the rotor is always facing the wind. The mechanical energy thus created is transformed into electrical energy by a generator located in the nacelle. The electricity is then converted to be fed into the power grid through underground cables. All the wind turbines in a farm are connected to each other and then to the electricity network via a transformer.

The electrical energy produced by a wind turbine varies mainly according to three parameters:

The power of a wind turbine is the amount of energy produced in one second. The onshore wind turbines currently installed in France have a maximum power of 2 to 4 megawatts (MW) when the wind is strong enough. If the wind is weaker, less power is supplied.

Maximum power, however, is not the best indicator for comparing the performance of one wind turbine with another. It is better to refer to the total amount of electrical energy produced in a year, which allows us to simultaneously take into account the force, the frequency, and the regularity of the winds. Thus, a 2 MW wind turbine produces an average of 4,200 MWh per year, or approximately the average electricity consumption of more than 800 French households.

A wind turbine produces electricity 75% to 95% of the time on average. Wind less than 10 km/h is insufficient to start and run a wind turbine. Conversely, too strong a wind (greater than 90 km/h) causes the turbine to stop, so as to avoid any risk of equipment breakage and to minimise wear and tear. These interruptions due to strong winds are infrequent in mainland France: they do not exceed 10 days per year per wind turbine.

As of 31 March 2021, France had a total of 2,030 wind farms connected to the grid for a total capacity of 17,900 MW. Their distribution is not equal throughout the territory. Hauts-de-France and Grand-Est alone account for 44% of all French installations. The Somme and Pas-de-Calais are the two best-equipped departments, with 176 and 130 sites respectively, followed by Aisne and Marne (105 each).

2 -  Why are wind turbines installed at sea? 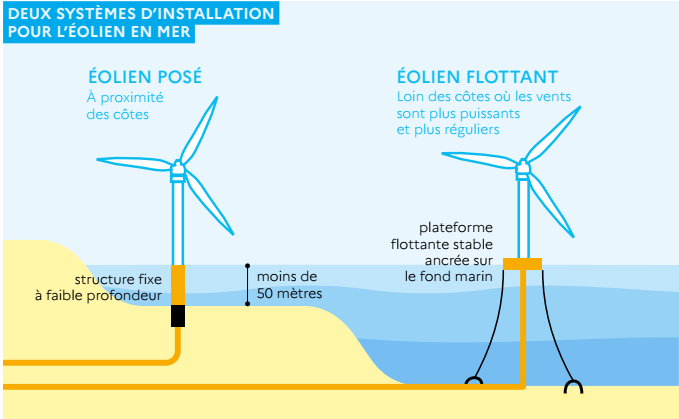 On the other hand, the installation of wind farms at sea is more complex and much more expensive, given the seabed, more severe weather conditions than on land and the distance from the coast.

In France, offshore wind power is only beginning to develop. Currently, seven offshore wind farms are being developed in the Channel and on the Atlantic coast. Four projects started in 2021, with commissioning scheduled from 2022. Regarding floating wind turbines, research is continuing and a first prototype was installed in 2018 off Le Croisic. Four pilot floating wind farms are also being developed, with installation scheduled for 2023 in the Atlantic and Mediterranean.

In the same folder