Methane and the greenhouse effect

It is colourless and odourless, twice as light as air, and is found everywhere on land, as well as at the bottom of the ocean. It warms the air 25 times more than carbon dioxide (CO2), but dissipates into the atmosphere after about ten years. It is responsible for a quarter of global greenhouse gas emissions, but is often the forgotten enemy in the fight against climate change – despite warnings from scientists. You’ve guessed it: it’s methane – the primary component of natural gas and biogas.

More complex than carbon dioxide, there are still gaps in what we know about methane, although it is playing an increasingly important role in scientific research and climate policy. Overview and current status of the other greenhouse gas.

Methane was once known as “marsh gas” because it is concentrated in wetlands and was discovered in 1776. Composed of one carbon atom for every four hydrogen atoms (CH4), it is naturally present and relatively abundant in the natural environment. It is the simplest and only hydrocarbon that can be obtained by a natural biological process, namely the fermentation of organic matter in an oxygen-free (anaerobic) environment.

Methane was not identified as a greenhouse gas until 1976. It absorbs some of the infra-red radiation emitted by the Earth and prevents it from escaping into space, thus contributing to global warming.

Methane is a fuel with great potential. Combusting it results in carbon dioxide and water vapour, both of which contribute to the greenhouse effect, as well as a large amount of energy in the form of heat.

Methane is arguably the most dangerous of the greenhouse gases (GHGs) since its warming power is far greater than that of CO2. On the other hand, since methane has a lifetime in the atmosphere of “only” 10 years (compared with 100 for CO2), its global warming potential over 10 years is 25 times more powerful than CO2. Methane is thus the second most important greenhouse gas, responsible for about a quarter of GHG emissions. According to the IPCC, it is responsible for 0.5 °C of the 1.1 °C temperature increase since pre-industrial times. According to the UN, halving methane emissions would prevent an increase of 0.3 °C by 2045.

However, the global economy is not moving in this direction. Indeed, after a sharp increase in the 1980s and 1990s, global methane emissions were virtually stable until 2007. They have since resumed their increase, particularly in the agriculture and energy sectors, in Asia and Africa. Researchers from the Global Carbon Project have found that global emissions have increased by 10-15% from 2007 to the present, undermining the international community’s goal of limiting global warming to 2 °C by the end of the century.

In any case, it is essential to understand the different sources of methane before seeking to reduce emissions. While the origin of CO2 emissions is easily identifiable (the burning of fossil fuels), scientists are struggling to identify which factors are responsible for the increase in methane emissions.

Where does methane come from?

Methane is the most common natural hydrocarbon found in the air and subsoil in the form of significant quantities of natural gas. To simplify matters, we can distinguish between emissions of natural origin (40% of the total) and those of human or anthropogenic origin (60%).

How these various sources of emissions will evolve over time remains uncertain. However, inputs from fossil fuels, waste and agriculture are expected to increase as a result of global population growth, industrialisation in some countries and growing energy demand.

Awareness of the need to contain and then reduce methane emissions on a global scale was relatively late in developing. In 2014, the IPCC (Intergovernmental Panel on Climate Change) established that the influence of methane on the climate has long been underestimated. Methane persists in the atmosphere for 10 years, but it is a much more powerful greenhouse gas than CO2: a methane molecule absorbs on average 28 times more radiation than a carbon dioxide molecule over a period of 100 years. On the other hand, reducing methane emissions may be more economical and effective in mitigating climate change than reducing CO2, given its high global warming potential and its lifetime, which is 10 times shorter than that of CO2.

Last November at COP26, around one hundred states committed – as part of the Global Methane Pledge – to reducing their methane emissions by at least 30% by 2030. According to the UN, achieving this target would prevent a 0.3 °C increase in global temperatures by 2040. However, some coal-producing countries did not sign up to the agreement, including China, Russia and India.

Given the diversity and complexity of methane sources, there is no single solution and the solutions need to be broken down source by source.

For agriculture, methane emissions from ruminants must be addressed. Several studies have highlighted the role played by diet. Replacing beet pulp with starch-rich foods (barley, wheat, maize) would reduce emissions by a third. The INRAE (France’s national research institute for agriculture, food and the environment) has shown that eliminating starches such as soya and replacing them with fats such as linseed would improve the nutritional quality of milk, while at the same time reducing methane emissions by 20 to 40%. Another promising avenue is the introduction of algae into the diet, which would reduce fermentation in the intestines by 50 to 80%. Other work has shown that species selection also reduces methane production.

London-based start-up Zelp has developed a mask that recovers a third of the gas emitted when cattle belch. The solar-powered mask absorbs methane, stores it and converts it into carbon dioxide, which absorbs nine times less radiation than pure methane. Cows would not be bothered by wearing the mask. These masks will go on sale this year marketed by Cargill, the food giant. The price should be around 30 euros. 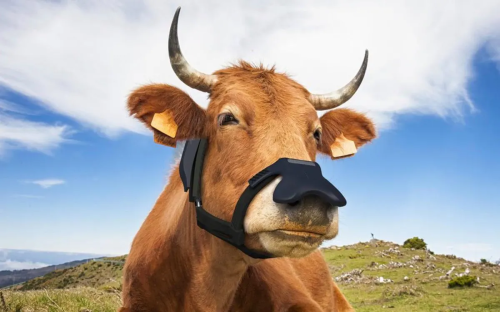 Regarding livestock effluent, the biogas emitted when it decomposes can be recovered and made use of by methanising it. In this area, Unifergie, a subsidiary of Crédit Agricole Leasing and Factoring, is a leader on the French market: it has built a third of the country’s methanisation facilities.

To reduce the gas produced by rice cultivation, it is possible to select rice species that produce less methane, reduce the quantities of fertiliser used or combat water turbidity and sediment production. Asian studies have shown that draining rice fields twice a year can reduce emissions by 80%.

With regard to methane from fossil fuels, the International Energy Agency estimates that the sector could reduce its global methane emissions by 75% and that most of these reductions could be achieved at zero net cost. The European Commission has recently adopted strict measures and rules with the aim of reducing emissions by 80% by 2030. Brussels also intends to regulate “imported” methane emissions from 2025.

Regarding methane emitters, oil and gas companies have been slow to recognise the environmental and economic need to reduce methane leakage. Launched in November 2020 by UNEP (United Nations Environment Programme) and the European Commission, the Oil and Gas Methane Partnership brings together more than 80 companies which account for more than 50% of global oil and gas production. They have committed to greater transparency regarding their methane emissions. TotalEnergies has committed to eliminating routine flaring by 2030 and ExxonMobil plans to reduce its emissions by 50% by 2025 compared with 2016.

Similarly, methane gas from mining operations could be captured and recovered as heat or biofuel.

Long neglected in favour of CO2, tackling methane emissions has gradually established itself an indispensable and promising measure for achieving the objectives forming part of the fight against global warming. Responsible for a quarter of global GHG emissions, methane has a major role to play in containing rising temperatures. There remains the major unknown regarding the planet’s natural sources of methane, which will continue to increase with rising temperatures, as is the case for lakes, rivers and permafrost. The commitments made at COP26 marked a turning point in the global fight to tackle methane. But the political will needs to be equal to the task.

Widely present in the natural environment, methane (CH4) is a potent greenhouse gas (GHG) with a global warming potential 25 times that of carbon dioxide. It accounts for a quarter of global GHG emissions.

Methane emissions can be of natural origin (40% of the total), in low-oxygen wetlands, or of human origin (60%), from agriculture (livestock), fossil fuels, human waste (biogas) or biomass.

At COP26 (November 2021), around one hundred states committed to reducing their methane emissions by at least 30% by 2030, which would prevent 0.3 °C of warming by 2040. Several avenues are promising, such as ruminant feeds, waste methanisation and European legislation to reduce fossil fuel emissions.

Reducing methane emissions is vital if we are to achieve the objectives forming part of the fight against global warming. States and companies have recently been mobilised, but political will is the only thing that will enable tangible and lasting results to be obtained quickly.

If you wish to exercise your right to object to the processing of personal data for audience measurement purposes on our site via our service provider AT internet, click on refuse